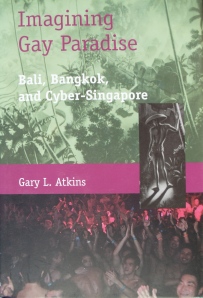 “This is a story about hunting for home

and founding paradise instead”

Imagining Gay Paradise: Bali, Bangkok and Cyber-Singapore depicts three types of queer “paradises” in Southeast Asia and follows the men who built them as places of imaginative dwelling for those who are sexually marginalized and for those who dissent from customary ideas of male gendering and sex. The book examines what then happens to each man and each paradise as colonial and national politicians deploy sex and gender as weapons of power.

Imagining Gay Paradise opens at the “End of Empires” with a story recounting the absorption of the Western triple supremacy of romantic heterosexual monogamy in Siam during the early 20th century reign of King Vajiravudh. This Western notion of the superiority of romantic, heterosexual monogamy to all other relationships of love includes a flipside triple taboo against relationships that are non-romantic, non-heterosexual, or non-monogamous — particularly those that might be inter-racial or inter-generational. Vajiravudh’s paradoxical task as the first Siamese king educated abroad is to institute the new supremacist ideology as a form of “civilization” — but he himself dissents from that ideology, preferring his own non-romantic, non-heterosexual, male-oriented paradise at his Saranrom palace. He resists the coercion to marry as long as he can, until the succession of the Chakri dynasty depends on it — and even then he returns to the “old ways.”

Intertwined with Vajiravudh’s story is a queer reading of Walter Spies, a gay German painter and lover of the famed gay German movie director, Friedrich Murnau. After helping Murnau film Nosferatu, Walter — then in his 20s — leaves Germany, calling its people “dry and unfeeling” and frozen into monumental theories and laws about good and evil and about beauty and ugliness. In the late 1920s and 1930s, he helps turn Bali’s image into that of an  aesthetic male paradise, resisting the collapse of German idealism into Nazi chaos. Using techniques of magical realism in paintings, in movies, and in the choreography of the famous kecak male dance, Walter proposes an understanding of manhood, especially Southeast Asian manhood, counter to that offered in the racist and heterosexist Nazi imagery — but in the process he becomes the prey of evangelical Christians and Nazi sympathizers in the Dutch East Indies. In his short 41 years alive, Walter is exiled or imprisoned three times: first, by the Russians who distrust him because his family is German; second, by the Dutch because he breaks a triple taboo against homosexuality as well as against intergenerational and inter-racial relationships; and third, by the Dutch again because he is a German ex-pat. Ironically, given his portrayals of the Asian male, he is finally killed by the Japanese.

The second part of the book follows “The Hope for a Better Age” with the contemporary recasting of queer dissent against the triple supremacy.

Khun Toc, another international student but in the 1960 and 70s, returns to Thailand to build a new place of dwelling by becoming the mastermind of what will be a globally known erotic paradise for queer men, the Babylon in Bangkok. He takes as his mission the creation of a home “where arts, sex and love converge” amid the global collage that is modern-day Bangkok. Khun Toc’s urban island rises as an architectural space designed to communicate a sense of queer arrival, a place for constructing globalized community, and mazes for meeting the unexpected. Eventually, during a “social order” campaign, the Thai government of Thaksin Shinawatra acts against Babylon and its dissent from what the government thinks “the new man” of Thailand should be.

A final story traces the creation of Fridae.com in Singapore and its companion Nation dance parties, imagined by a young queer entrepreneur and activist,  Stuart Koe — who was initially educated to help turn Singapore into a smart cyber-paradise for biotechnology and computers. But Stuart becomes another global activist engaged in building a home for those queer citizens who face an otherwise inhospitable political climate in their homeland. Eventually, the Singaporean government acts against him, attacking Fridae’s discussions of non-monogamous homosexual relationships and  forbidding large assemblies aimed at helping queer men and women feel more at home on the island — specifically the Nation dance parties.

A fifth character, Darrell Berrigan, the World War II war correspondent and gay editor of the Bangkok World during the 1960s, makes a cameo appearance in the book as the colonial empires in Southeast Asia end and nation-states arise. Berrigan’s gay-related murder in 1965 sets off a newspaper firestorm as Thailand wrestles with the definition of gay, and newspapers warn against gay men as a threat to the social order.

Collectively, these interlinked stories form a single saga that ranges across a century from 1910 to 2010, telling how creative queer men have tried to “come home” as well as “come out” in Southeast Asia. They pursue greater sexual justice not so much by through strategies of Western-style political activism but by using techniques of magical reality — blends of sound, light, and rhythm in which, as one scholar puts it, “a battle of two oppositional systems takes place, each working toward the creation of a different type of world from the other.” The men build geographic, architectural and virtual spaces that challenge ideologies of heterosexual supremacism.

The theologian Walter Bruggemann once had this to say of those whose common experience is not one of race, or class, or religion, but one of growing up individually as outcasts:

“The central problem is not emancipation but rootage, not separation from community but location within it, not isolation from others but placement deliberately between the generation of promise and fulfillment.”

Stretching over a 100-year period from 1910 to 2010, Imagining Gay Paradise explores that generation of promise that begins to arise in Southeast Asia at “the end of empires” and the start of that “hope for a better age” — when “coming out” can be matched by “coming home.”

What is it to dwell? How does building belong to dwelling?

“To build is in itself already to dwell.”

Imagining Gay Paradise is available as hardcover, paperback or e-book and is published by Hong Kong University Press with co-publishing by Silkworm Books in Southeast Asia. It is distributed in the United States by Columbia University Press and in Canada by the University of British Columbia Press.

Prelude: Letter from the Surabaya Jail

Part One: At the End of Empires

Part Two:  The Hope for a Better Age